Last week I was fortunate enough to attend a private, curator led view of the Metamorphosis Titian 2012 show at the National Gallery.  My reason for writing this blog is twofold.  First it’s to encourage anyone who’s in London between now & 23 Sept to call in & see the exhibition.  It’s free and as it’s small it won’t take you long – although you may find the paintings so mesmerising you’ll stand in front of them for longer than you realise.

The show is a multi arts project and if you’re interested in finding out more the link is here www.nationalgallery.org.uk/metamorphosis  For the purpose of this blog I’m going to focus only on the three Titian paintings, exhibited together again for the first time in over 200 years.  Two of the paintings entitled “Diana and Actaeon” and “Diana and Callisto” were purchased recently by the Gallery from the Duke of Sutherland for around £100m for the pair, thought to be about 1/3 of their market value (that’s about £100,000 each for each year that’s passed since the artist died).

When I entered the gallery I thought at first the paintings were recently painted reproductions of the originals, the colours are so remarkably bright and vibrant.  Titian from his 16thC base in Venice had access to amazing pigments and the Gallery has been able to determine that the blue pigment in these sister paintings originated in Afghanistan.  It’s no wonder that Lucian Freud described them as “simply the most beautiful pictures in the world”.

My second reason for writing the blog is to share with you the massive difference it made to me having a knowledgeable guide explain the background to the three paintings.  It had really never occurred to me to join a gallery tour before but the additional enjoyment that Colin Wiggins brought to the experience was unbelievable.  He explained to us the stories depicted by the three paintings, made the link to Ovid’s writings without losing me or losing my interest (attention span of a fruit fly I’m afraid), gave us the background to how the paintings were commissioned by Philip II of Spain and how Titian delivered only two of the three to him (choosing to keep the Death of Actaeon for himself as he approached his own end of life) and he added a personal touch by telling us the story of seeing that painting himself on a school trip.  At the time the National Gallery were raising funds to buy the painting but Colin wouldn’t contribute any of his pocket money as he “hated its brownness”.  Now, of course, he loves the painting.  Appreciation of art no doubt improves with age – a bit like eating olives & anchovies…

He also talked about Titian’s innovation as an artist and stepped us through how he had paved the way for Rubens, Delacroix, Pollock, Bacon and Frank Auerbach to follow in his footsteps.  Fascinating to think about how an individual artist can leave a legacy with a halo effect that continues on for 500 years so far.  I wonder if Apple will be able to match that?

For anyone who isn’t familiar with the story, Actaeon accidentally stumbled upon Diana bathing in the forest surrounded by her nymphs.  He glimpsed her naked body & she splashed water in his face, turning him into a stag who was then hunted down & torn limb from limb by his own pack of hunting dogs who no longer recognised him.  Some may say quite a harsh punishment.

I urge you to go and enjoy this exhibition.  Thanks to the National Gallery for having the patience and wherewithal to buy these beautiful paintings, thanks to the curators & collaborators on this project for assembling such an enjoyable show and thanks to you Colin for sharing your experience and insight. 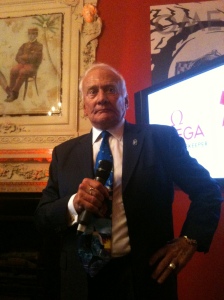 Buzz Aldrin speaking at Soho House during the London Olympics

Here in the middle of London Olympics fever it’s easy for me to identify my favourite moment from the Games & I’m afraid it isn’t sport related.  It was 2 August when my goddaughter Olivia & I went along to Soho House for an audience with Buzz Aldrin – yes that Buzz Aldrin – second man to walk on the moon & one of only 9 human beings still alive who have walked on the surface of our closest space neighbour.  And let’s face it – he’s the one we’re all familiar with as only one decent photograph was taken of poor Neil Armstrong on the moon.

To say we were excited doesn’t even come close.  Walking there I told Olivia the story of watching the Apollo 11 moon landing in July 1969 as a child.  My sister had already told her the same story many times.  As children we (with tens or even hundreds of millions of others) watched Apollo 11 blast off and felt we were there every step of the way with the 3 astronauts as they sped towards the Moon.

When it was near time to land, we were horrified to find that landing time was way after our bedtime but our dad promised us faithfully he would wake us in time to watch it live & he was true to his word.  He woke us up at 3.30am & carried us both downstairs wrapped up in blankets.  It’s something I’ll be eternally grateful to him for as those 8 days still go down as one of the most exciting periods of my life, even now over 40 years later.

I’m lucky enough to meet a lot of unusual & interesting people in the course of my work and life but I never thought I’d get to meet Buzz Aldrin in a million years.  To see him so vibrant & fresh at the age of 82 and with his adventurous spirit intact was a complete joy.  Anyway – enough old chat – here’s some of the interesting (to me anyway!) things he said on the day:

The last of his quotes that I’ll leave you with is my favourite.  When asked what was the strangest thing he’d seen or felt in space he said “You know, when you’re on the Moon pretty much everything is unusual”.  Love it. 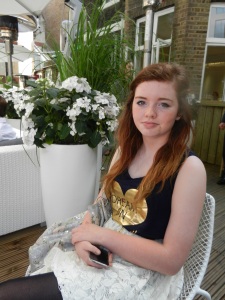 Olivia in the Soho House garden

Thanks Buzz for being a complete inspiration all of my life and for being better in real life than I dared you would be.  Thanks to Alex Donaldson and Isabella Macpherson of Arts Co for squeezing Olivia & me onto the packed guest list and thanks to Ben Cackett of the Mayor of London’s office for organising such an amazing cultural programme to run in parallel to the London Olympic Games 2012 and for being such a wonderful host over the past two weeks.

Also – if you get an invite to a party at Soho House accept it at once.  It’s the coolest party venue in London and probably in the world.  Olivia & I believe it really is “Through the Looking Glass” & that footman on the front door really is a White Rabbit.  We checked the white flowers everywhere to see if they’d been painted…

Folks – there’s a lot more I didn’t write because it would have made the blog too long but if you ask questions in the comments I’ll do my best to answer them.  Buzz Aldrin answered 15 questions from the audience and he answered them thoughtfully & with considered & coherent lengthy answers plus I have a lot of notes.