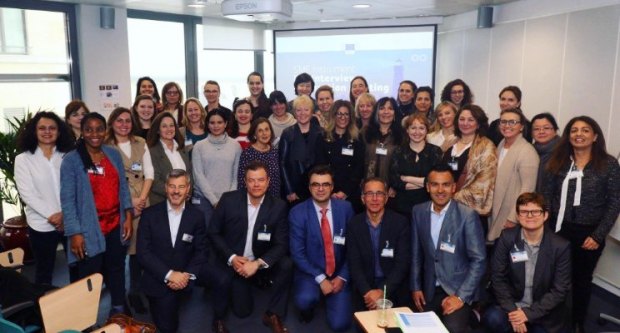 In the middle of my EU Expert Jury colleagues, Brussels Feb 2018

I thought this might be a good topic with which to kick off my 2019 blogging effort.  I haven’t made any New Year resolutions but I am trying #100People again for what will be my third year.

A few people have seen the hashtag & asked me about it.  It’s an idea that started out as one of my social experiments.  I moved back to Ireland in May 2016 after 5 busy years in London.  After about 15 months of being in Ireland I realised that despite spending a day or two in London most weeks there were loads of people that I no longer saw regularly or even at all … so I made a list.  In that first 2017 list I included for good measure a couple of people I’d never met in real life but thought I would like to meet.  (For completeness they were Ken Perry, Pat Phelan & Sir Tim Smit & the only one I’ve actually met, so far anyway, is Tim Smit).

During the Christmas 2017 holidays I made my 2018 #100People list.  My 31 December tally for 2018 was 23/100.  Again not great.  It’s a stretch target I guess!  I’m hoping to do a lot better in 2019.  This year’s list includes 10 people who were on my 2017 and 2018 lists.  These 10 I must see in 2019 and that’s the closest I’ll come to a New Year’s Resolution this year.  (In case anyone’s interested they are Charles Jennings, Donald Clark, Janet Harkin, Alexander Stevenson, Dee Forbes, Shirley Ayres, Paul Clarke, Kersten England and the two people mentioned above that I’ve still never met – Pat Phelan and Ken Perry).

So – for clarity – the people on my list are nearly all business associates; some are friends too but that’s a happy bonus.  They’re all people that I genuinely like and enjoy seeing.  My rationale is that a business network is essentially a live asset that needs to be cared for and given some attention, even fed and watered occasionally.  Sure, you can keep up on LinkedIn and Skype and via social media but that isn’t the same as sitting down for an hour or two for a coffee and a catch up chat.   I always say that everything good that comes my way in my working life comes to me from my network.  I’ve only ever applied formally for one job in a career that’s so far lasted 38 years.  Every single week someone rings me out of the blue to float an idea or a fascinating new opportunity arrives unannounced into my inbox and I believe that’s because I make an effort to stay in touch.  The magic won’t happen unless you’re prepared to put in some time and see people in person, at least occasionally.

Next – over 90% of the people on my 2019 list I didn’t see at all in 2018 and seven of the people on this year’s list I’ve never yet met.  There are a large number of people that I see frequently and none of them are listed.  This list is about people I have to do a little bit extra to see.

A few other friends have so far tried it too.  In 2018 Sinead Crowley, Sharon O’Dea and Amanda Smith all ran a list.  This year it seems to be gaining a bit of momentum (probably down to Sharon O’Dea talking about it on her blog and on Twitter) and I’ve seen a number of people toying with the idea – Giuseppe Sollazzo, Dan Slee, Rachel Murphy, Sarah Lay, Matt Jukes and others.  I’d suggest it’s worth a try if you find the years drift by and there are people you’ve met through work and liked but somehow don’t see anymore.  100 is perhaps ambitious (terrifying? – someone asked me recently if it had to be 100 new people!) so maybe scale back accordingly and don’t forget to include a few people you know online but haven’t actually met in real life.  You can set your own protocols for your list.  On my list this year, in addition to the two “unmets” above I also have Jonathan Huish, Emer Hinphey, Jo Cruse, Allyson Kapin and Deirdre McGlone.  Wish me luck.  Incidentally, I haven’t yet not liked a person in real life that I’ve already known online and I’m hoping to preserve that record.

My 2019 list currently has around 80 names.  I like to leave a few slots for people who “emerge” as the year progresses (mostly people I forgot to include in the first place!) or for people I don’t know about yet.  I’ll post my #100People to Twitter as I see them.  If you decide to give it a try in 2019 I’d love to hear about your own #100People progress.

UPDATE 8 Jan 2019 The blog has started a bit of Twitter interest this week with lots of people saying they’re going to try their own version of #100People in 2019.  One person is starting off with a target of 12 2019 meetings & Rachel Murphy is going to go with her age (40 – how can you even be 40 yet Rachel!!!).  Good luck if you’re giving it a try … although we’ll all struggle to keep up with superwoman Sharon O’Dea who bagged her first in Thailand on 2 Jan …

This week at London’s branch of IIBN we were lucky enough to have Willie Walsh, CEO of International Airline Group (parent company of British Airways) as our keynote speaker at one of our regular business networking events.  A New Year boost to start the business year and what an opportunity – to hear the great man address a 200 strong Irish business audience.  Some might say a tricky enough crowd!

There’s been plenty written about Willie Walsh in the 15 or so years since he was first appointed CEO of Ireland’s national airline Aer Lingus but on the night I was more interested in seeing what makes the man himself tick.  He didn’t disappoint.  Alongside business chat and the expected slides about performance of IAG he told plenty of personal stories (I won’t publish them here – you’ll just have to go & hear him speak yourself) that were amusing but also gave some insight into the man behind the headlines.

The keynote covered IAG expansion (the usual big corporate stuff about world domination), a very useful explanation of how the fall in crude oil price hasn’t cut costs for European airlines due to adverse movements on the currency market (IAG still spends €1.6 billion on fuel per quarter), his work as Chairman of Ireland’s National Treasury Management Agency (it was particularly interesting to get insight straight from the horse’s mouth into some of the areas the Ireland Strategic Investment Fund is investing – domestic life sciences companies, several areas of new technology and also a housebuilding joint venture to address acute housing shortage in Ireland), Brexit (he’s against it, along with most other CEOs of large UK corporates) and Heathrow expansion (“I don’t believe this UK government will tackle the issue of airport expansion and this provides a great opportunity for Dublin”).

But what did I like the most.  First of all, Willie Walsh is a great live speaker.  He’s very natural, entertaining and articulate but there’s an underlying seriousness and real substance to his delivery.  I could have listened to him speak for much longer.  It’s the confidence that comes from having deep, deep knowledge of your subject matter; something you don’t see so much in business these days.  He reminded me of Michael Dell, another great business leader that I heard speak a number of times in 2015 – except that Willie is far more irreverent!  And he probably uses “richer” language than Michael Dell would ever do…but both of them have the gritty determination of people who’ve seen everything their chosen industry has to offer or throw, both command the respect of the entire room and both are and always have been hard working to the extreme – you can just tell that by listening to them.

Before the keynote started, we had a 3 minute startup pitch as is usual at IIBN.  We like to give our newer entrepreneurs and future leaders a chance to have their voices heard and to expose them to potential investors, partners, customers.  This week it was the turn of Sarah O’Connor and Isolde Johnson, co-founders of the Cool Bean Company.  It was a great pitch and the girls rather cheekily finished up with a photograph of a British Airways plane (long haul flights & beans – I’m not too sure about that!) and a smile over to Willie.  Let’s face it – you’ve gotta pitch when you get the opportunity.  It was great to see Willie Walsh chatting with Sarah & Isolde afterwards and also that during his own keynote he commented what a good pitch they’d given.

A lot of what he said on the night was aimed at people new to business or young people starting out.  He said that he himself has never really applied for a job and told the story of how as a 17 year old at school in Dublin he casually went along to an open day at Aer Lingus and how that led to him becoming an apprentice pilot instead of going straight to university.  He said he’s shocked by how afraid people are of making mistakes and (rolling his eyes) recounted a few of his own.  The message was that if you don’t push yourself so hard that you make a few mistakes, you’ll never reach your potential as you won’t know where your boundaries lie.  Of course, as everyone knows, the cardinal sin is not learning from your mistakes or making the same mistake twice…and the Holy Grail is the knack of learning from other people’s mistakes, although I’ve yet to meet anyone who can do that successfully!

He also talked on the topic of finding a business personality that you own and are comfortable with.  Fortunately, we don’t have too many Michael O’Learys – although you have to admit that it’s worked for him.  Willie Walsh went back to himself as a 17 year old & said that of the panel that interviewed him on that day, three thought he was smart and self confident but the fourth person thought he was cocky.  I guess he had a bit of luck with him on the day that the balance didn’t go the other way – but the point he was making is that it’s a fine line and one that only the individual can find and get comfortable with themselves.

Final word from me today.  Check out Cool Bean Company when you get a chance – we might only be half way through January but they’ve already announced a contract this year with all 135 Waitrose stores so I think we’re going to be seeing a lot more of Sarah and Isolde.