Two recent trigger events prompted me to write this blog. The first was this tweet last week from Sam Missingham (@samatlounge) “Women of the world, if you are asked to speak at an event or appear on a panel say Yes (especially if you don’t really want to)”. The second was seeing Carey Lohrenz speak at Dellworld 2015 & listening to her talk in depth about (generally) how women don’t put up their hands until they’re sure they can do 120% of what’s being asked of them. Carey (& I) think you should put up your hand when you can do 75 or 80% & figure the rest out from there.

I know this topic has been done to death a bit in recent years but I’ve never written about this from my own personal perspective so I thought I’d do that in case anyone finds it interesting & maybe it will encourage a few more people to be brave.

It’s about 2 years since I made the decision to exit from my startup/scaleup Learning Pool, sell my half of the business & go & do something else. As CEO of a small growing business your default position when presented with most decisions is No. It has to be. In order to focus on growing your business, meeting payroll every month & moving the needle significantly in the right direction you need to eliminate as much distraction as you possibly can from your business & your life.

You say No to most conference attendance opportunities, most business social and networking events (especially if they involve travel or an overnight stay) and most requests for you to speak at other organisations’ events. Unfortunately, when you’re in a place where you sometimes wonder if you could function with one or two hours less sleep at night, you don’t have a lot of time to mentor people inside or outside of your organisation either – the smart ones learn by running along beside you.

One thing I did manage to make time for as Learning Pool grew was speaking to students at local schools about careers in STEM, usually through Young Enterprise NI. As entrepreneurs, business owners or people with careers in STEM we all need to do a bit more of this.  The other was chatting to other entrepreneurs who were a few steps behind where we were – I knew from experience how useful this had been to us when we were in startup mode.

I guess the most extreme example of me saying No was the night (it was International Women’s Day 2011 – the 100th anniversary of IWD) when I received a late call from someone in government inviting me to join the Northern Irish delegation to the White House to meet President Obama on St Patrick’s Day. What was my response? I said “I can’t possibly – our year end is end of March & I’m too busy”. There was a brief silence at the other end of the line & then the very sensible person said – Mary – when someone asks you in 5 or 10 years time, what were you doing on St Patrick’s Day 2011 which would you rather say – that you met the President of the United States or that you were doing spreadsheets… I made the right decision in the end!

So – for the last 2 years I’ve been running my own private social experiment in which I try to say Yes to most things that are presented to me – within reason of course. Below are some of the positive things that have happened as a result (to date there have been no negative outcomes). 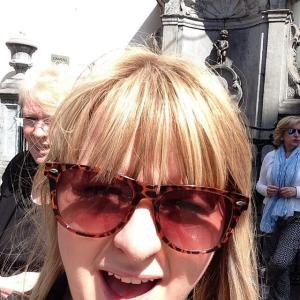 I said Yes to Terry Ryall, vInspired’s founding CEO when she asked me to help the charity launch Task Squad. This gave me the opportunity to work in a charity for the first time in my career & the insights that gave me have allowed me to since make a contribution in a number of different ways to how charities and not for profits can better benefit from technology. I also connected with an entire new network of people (including the fabulous Sam Sparrow), charities and funders and learned all about social impact investment. This eventually led to me meeting Sally Higham and angel investing in her software platform business for youth & sports clubs, Run A Club.

I said Yes to John Knapton when he asked me to join Northern Ireland Science Park in Belfast as one of their Entrepreneurs in Residence. As well as being a lot of fun, this has led to me formally mentoring one young entrepreneur for the past 6 months and offering advice & help to a number of other startups. Best of all, I got to meet Her Majesty the Queen in Buckingham Palace in June 2014 and on the same evening met Norwegian entrepreneur Ollie Gardener & 8 months later angel invested in her social learning platform, Noddlepod.

Meeting Her Majesty the Queen in Buckingham Palace June 2014

I said Yes when my colleagues at the Irish International Business Network asked me to run the SharkTank at our November 2014 conference in New York City and by doing so met wonderful Canadian entrepreneur & angel investor Kelly Hoey. 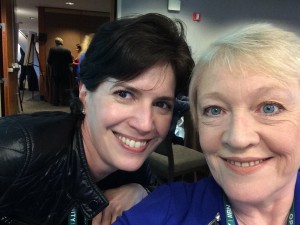 We had a lot of laughs on the day, found we have a lot in common & since then we’ve helped each other on a number of things and are on the road to becoming firm friends.

I said Yes when the Research & Educational Network Norge asked me to deliver a talk on the Future of Learning to 200 people in Oslo, even though I can’t speak a word of Norwegian and the prospect of doing something like this was terrifying. You can read more about my Oslo experience in a previous blog here if you’re interested. Suffice to say it turned out well despite my fears!

More recently I said Yes when Will Pritchard of AxiCom PR asked me to follow him back on Twitter so that he could DM me about something. Before starting my Yes experiment I could possibly have responded quite rudely to Will’s request. This led to me attending DellWorld 2015 as a guest of Dell, meeting tons of fabulous people, meeting Michael Dell who’s one of my all time top business champions and finally realising my dream of visiting Austin, Texas after 15 years of being too busy to attend SXSW. Michael Dell doesn’t really do selfies so I had to trade him a story. I told him how my friend Tim Ramsdale persuaded our employer CIPFA to buy a Dell server back in 1989, shortly after Dell had started up in London. Michael loved the story & the selfie speaks for itself. I later told another story to the Dell senior team. It was how when Learning Pool was 6 months old we were evicted from the flat in London that we were secretly using as an office. The final straw was when our nosy neighbour opened the door to a courier who was delivering 6 large Dell boxes to us. She rang our landlord to report us & we were immediately evicted. The guys agreed I should have told Michael that story too because he would’ve loved it!

I said Yes a couple of weeks ago when Dee Forbes rang me & asked me to speak at the Digital Week Ireland event that’s happening in Skibbereen 3-8 Nov – more details here. November’s pretty busy so I was tempted for just a moment to say No – but I thought to myself, why not. I haven’t been to West Cork for years & years & it will be so much fun and a good thing to do. Watch this space or come & join us.

Finally, on a personal note I said Yes when my partner of 23 years asked me to marry him in June 2014. We were married 6 weeks later in Fort William, Scotland on 21 July 2014, a joyous & sunny day.

I have literally hundreds of other examples, big & small. In the past two years my life has been enriched by the people I’ve met, the places I’ve been, the experiences I’ve had and the tons of new stuff that I’ve learned.

Not everyone has the same luxury of time that I do right now but I urge you to try this too, even if it’s just in some small way and especially if it’s something that takes you out of your comfort zone. Next time an opportunity presents itself to you & you find yourself about to say No, pause for a moment and ask yourself if you could say Yes instead. I promise you it’s worth it & I look forward to hearing about your experiences in the comments below.